“The more that you read, the more things you will know. The more that you learn, the more places you’ll go.” But, how well do we really know Mr. Theodor Seuss Geisel? Otherwise known as Dr. Seuss, this rhyming wizard holds a special place in our childhood storybook hearts, but there is 1 Thing or 2 that even the most seasoned Seuss reader would be curious to know. We’re diving into, “All the things you can think when you think about Seuss!”

Theodor Seuss Geisel had multiple pen names: L. Pasteur, Rosetta Stone, T (Theophrastus) Seuss, and, simply, Seuss. Adding in the Dr. prefix was all his own doing. His father had always wanted him to practice medicine, but Seuss never actually earned a doctorate degree. He was even voted Least Likely to Succeed by his Dartmouth graduating class! But, ironically enough, the only doctorate he would ever receive came from his alma mater in 1956–an honorary Doctorate of Humane Letters.

Believe It or Not!, the pronunciation of his name “Seuss” wasn’t intended to rhyme with moose, goose, or loose. It is actually supposed to be pronounced as ZOYCE, which is the German version of Seuss. But, in true rhyming fashion, he liked that the wrong “Seuss” paired nicely with mother goose, so he adopted that pronunciation.

His first “Dr. Seuss” idea was thought of while crossing the Atlantic on the liner MS Kungsholm.

During his travels, Seuss got so caught up in the pulse of the ship’s engine that he began experimenting with words that fit the rhythm. From this, And to Think That I Saw It on Mulberry Street was created, kick-starting his journey into the magical world of children’s publishing.

Though And to Think That I Saw It on Mulberry Street was rejected over 25 times, it was finally published in 1937.

Green Eggs and Ham was written on a bet.

Seuss’s biographer, Brian Jay Jones, told The Current, “He ends up putting maps up on the wall of his vocabulary words, and he has flow charts—it’s a math problem from him part of the time. So it’s no wonder that the ultimate plot of this book is about convincing someone to do something they didn’t really want to do. Seuss had a really hard time with this book.”

Dr. Seuss was the first recorded person to use the word “nerd.”

The first-ever recorded use of the word “nerd” is written in Dr. Seuss’s If I Ran the Zoo, published in 1950.

And then, just to show them, I’ll sail to Ka-troo
And bring back an It-kutch, a Preep and a Proo,
A Nerkle, a Nerd, and a Seersucker, too!

According to Merriam-Webster, the following year Newsweek came out with an article about the latest slang, including the word “nerd.” It wasn’t until the ’60s that the term took off and became used more frequently in text. If it is true that the word originated from the brain of Seuss, Merriam-Webster surely made sense of its depicted context clues:

“Its connotation of “squareness” may have arisen partly from the Nerd’s decidedly uncool appearance in Dr. Seuss’s illustration—not to mention, the juxtaposition of Nerd with Seersucker (seersucker being a rather uncool fabric). On the other hand, it can be argued that Dr. Seuss’s Nerd appears as more of a disapproving grouch than a “drip” or “square,” which, then, leaves us wondering: if it’s not the nonsense coinage Nerd, what inspired the formation and popularization of the slang term? Did the good Doctor really make it up or did it originate before the publication of his book?”

Dr. Seuss based many of his book illustrations on his whimsical taxidermy creations.

When Dr. Seuss was still just Theodor Geisel, he created a series of figures that he called “Unorthodox Taxidermy.” He made imaginative creatures that looked as though they’ve seemingly jumped right out of one of his iconic books. He used real horns, beaks, and antlers from deceased animals to create these whimsical figures.

Dr. Seuss pretended to have a daughter.

Unfortunately, Seuss’s first wife, Helen, was unable to have children. But, that didn’t stop the couple from raving about the achievements of their imaginary daughter, Chrysanthemum-Pearl, whom they apparently shared custody over. According to Smithsonian Magazine, Chrysanthemum was a part of their shared inner life and helped mask their anguish of not being able to have kids.

Besides discussing the accomplishments of his invented child, he included her name on their Christmas cards and dedicated his 1938 book, The 500 Hats of Bartholomew Cubbins to “Chrysanthemum-Pearl, aged 89 months, going on 90.”

Dr. Seuss was a real-life Cat in the Hat.

For over 60 years of his lifetime, Seuss collected hats from all around the world and kept them tucked away in a closet in his La Jolla home. Not only was collecting hats a hobby of his, but it also was a rather peculiar remedy for his writer’s block.

When he started writing children’s books, he’d often invite his editor in chief, Michael Frith from Random House, over to his house. The two would work all through the night. Whenever they’d get stuck, according to Dr. Seuss & Mr. Geisel by Judith and Neil Morgan, “Seuss would open a secret door to a closet filled with hundreds of hats. Then, he and Frith would each pick a different hat, perhaps a fez, or a sombrero, or maybe an authentic Baroque Czech helmet or a plastic toy Viking helmet with horns. They’d sit on the floor and stare at each other in these until the right words came to them.” 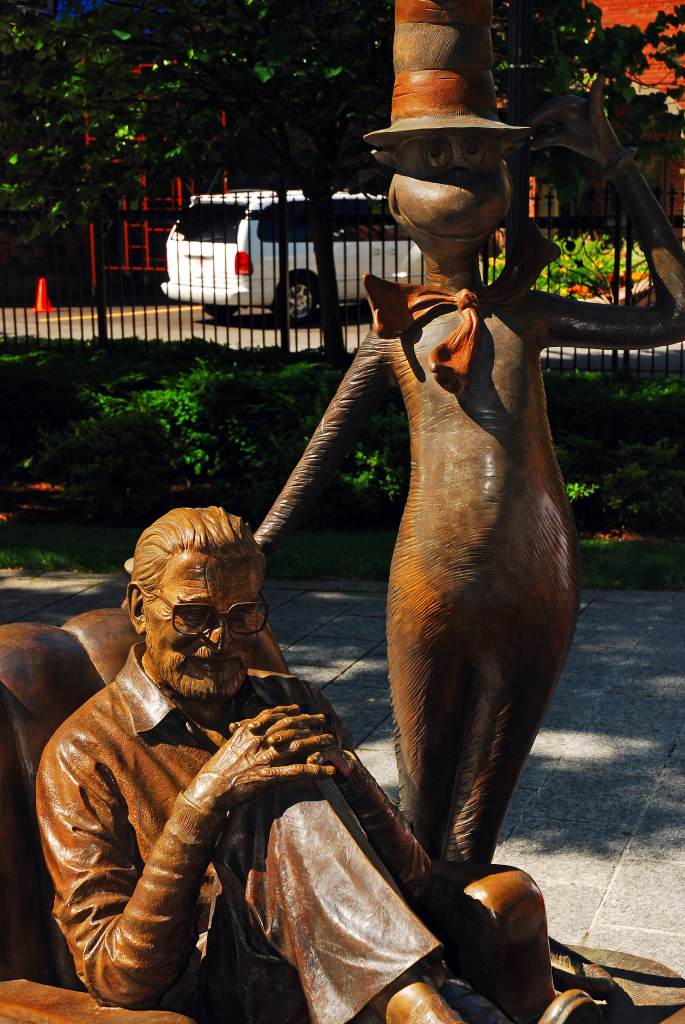 Besides wearing the hats as inspiration for writing, he would also wear them at dinner parties where it was tradition for guests to wear them as well.

Dr. Seuss had a license plate that read GRINCH.

In an interview with Redbook, Seuss admitted he was his own inspiration for writing the Grinch character. They quoted him saying, “I was brushing my teeth on the morning of the 26th of last December when I noticed a very Grinch-ish countenance in the mirror. It was Seuss! So, I wrote about my sour friend, the Grinch, to see if I could rediscover something about Christmas that obviously I’d lost.” 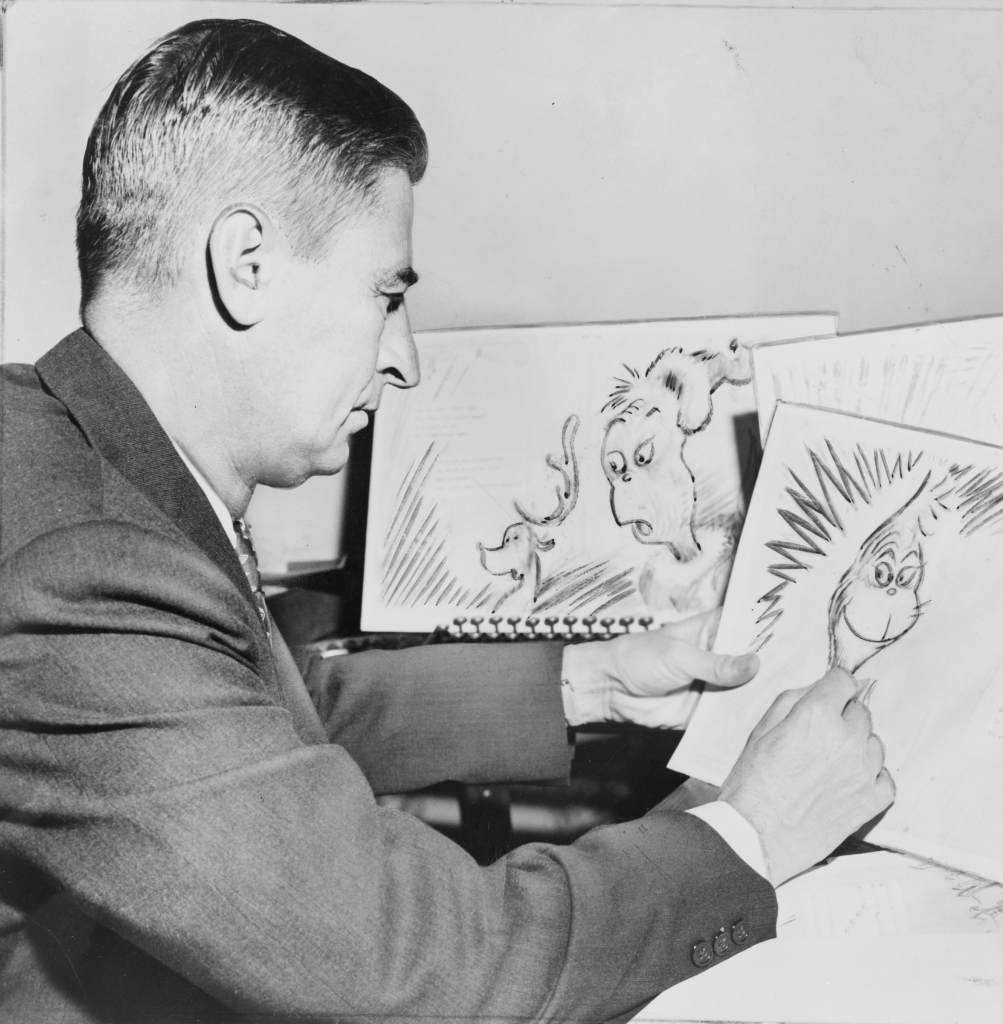 Seuss was also responsible for writing the original lyrics for the animated special, “How the Grinch Stole Christmas!” When the Whos down in Whoville sing on Christmas morning, after having their presents and decorations stolen, “Fahoo fores dahoo dores,” those iconic song lyrics were all just random, senseless words and noises that Seuss totally made up.

In his earlier years, Dr. Seuss’s most creative projects were prohibited by his advertising contracts.

Ever wonder how Seuss started writing children’s books? While he was under contract for his early advertising jobs, his creative outlets were restricted, leaving only children’s books an option. He became even more dedicated to creating basic level books for early readers after finding an article about how American children were having some trouble learning to read.

Before books, he made a living as an ad agency illustrator. Some of his clients included Ford, GE, and NBC, in addition to older brands such as Standard Oil, Flit, and Schaefer Beer. The illustrations in these ads are similar to those in his books, which is a bit strange to see since his target audiences for the ads were adults, while his books were obviously the contrary.

Seuss once attempted publishing a book for adults.

In 1939, Seuss wrote The Seven Lady Godivas, a story about seven medieval sisters who never wore clothes. And, keeping with the theme, he illustrated them fully naked throughout the entire book. Originally, 10,000 copies were printed but only 2,500 were bought, making this attempt a total failure.

According to The Atlantic, he said “I attempted to draw the sexiest babes I could, but they came out looking absurd.” His New York Times obituary quotes him once saying, “I’d rather write for kids. They’re more appreciative; adults are obsolete children and the hell with them.”

The last book Seuss published before passing was Oh, the Places You’ll Go! which is typically given to graduating seniors, successful young adults, or those on the cusp of achieving greatness in life. So maybe, after all, he did author some variation of an “adult book.”

Oh, the places he still goes!

Seuss is ranked number 6 on Forbes’ Top-Earning Deceased Celebrities list, bringing in $19 million from October 2018 to October 2019. According to Forbes: “Licensing deals with Hallmark, Universal Studios, and others add to the publishing empire that moved more than 5 million books stateside over the past 12 months.”

In 2010, Life Books added Seuss to its list of 100 people who changed the world. From three-year-olds to 103-year-olds, Dr. Seuss is still enjoyed today by readers of all ages. From his Mulberry Street to animated films to Seussical the Musical–there’s no stage too big for Seuss and his iconic characters.

By Michela Pantano, contributor for Ripleys.com

THE STRANGEST STORIES OF THE YEAR

‘Big Pile’ Of Live Eels Dumped In Lake In NYC Park; Impact Not Yet Known

Laid Off And Lost Your Health Insurance? You Have Options.